Deprecated: Hook tec_events_views_v1_should_display_deprecated_notice is deprecated since version 6.0.0! Use No replacement. Legacy views have been removed. instead. in /wordpress/wp-includes/functions.php on line 5756 Deprecated: Function Elementor\DB::is_built_with_elementor is deprecated since version 3.2.0! Use Plugin::$instance->documents->get( $post_id )->is_built_with_elementor() instead. in /wordpress/wp-includes/functions.php on line 5381 Philanthropy as the South's Passing Gear: Fulfilling the Promise - Alabama Giving Skip to content 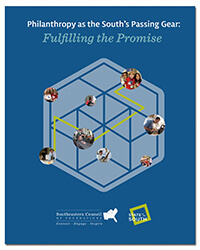 Last year, SECF and MDC came together to publish Philanthropy as the South’s Passing Gear: Fulfilling the Promise. Released a decade after the first ‘Passing Gear’ study, this report offers an update on the state of the region, noting issues that the South needs to face and change, while also providing a framework for achieving lasting impact and highlighting recent examples of transformative philanthropy led by Southern foundations.